Narelle had happily lived in her quirky Deception Bay home, just north of Queensland, for over 35 years. After her daughter and grandchildren made the move to the Gold Coast, she decided to pack up and sell her home in a bid to move closer to them down south.

However, despite having a big block which was close to the water, with easy access to the city, Narelle's house sat on the market for 6 months, without a single offer. The property looked old and tired and the floor plan was disjointed. Even with a reasonable price tag of $359k, it was proving difficult for potential buyers to see past the work the home needed to make it a functional family home. It was up to Shaynna and Charlie to find a means of enhancing the appeal of the home, without having to completely knock it down.

With an extremely limited budget, Shaynna strategically made low cost/ high impact changes throughout the interior. With first impressions most crucial, she decided to focus the majority of her time and funds on revamping the downstairs space. Improvements included:

New flooring - In order to create a sense of consistency and cohesion, Shaynna had modern hybrid oak flooring installed all throughout the bottom level.

Fresh new paint - The original fake wood panelling was removed, and the walls were repainted in a crisp white hue. This instantly brighten up the space and made the home feel more fresh and modern. In order to make the architectural ceiling beams stand out, Shaynna had the balustrade and front door painted in a sophisticated noir colour. She also created a feature in the entrance space by painting one of the walls a soft dusty pink. This helped to emphasise the height and scale of the wall and the unique design of the home. 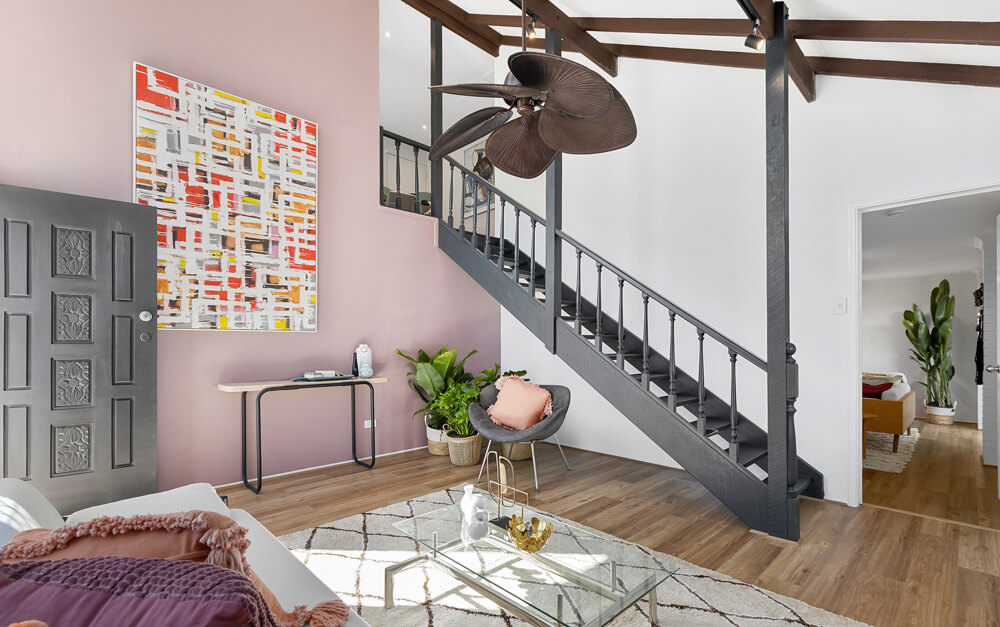 The curved bar fixture in the back room was removed, and the space was restyled as a little study nook. In the back living room Shaynna had the existing metal shelving taken out and a sleek built in TV and storage unit added in its place. This helped to open up the space and make the room feel more like a modern retreat, as opposed to a bachelor's man cave.

Stylish new window coverings - Shaynna replaced the old existing window coverings with Luxaflex Duette Shades. The unique honeycomb-within-a-honeycomb structure of these Softshades will help to provide efficient insulation by trapping air within the honeycomb cells. This will ultimately reduce heat loss in winter and keep the home cooler in summer. Shaynna opted for a blockout fabric opacity in the bedrooms for the ultimate light and privacy control, whilst a translucent fabric was used in the living rooms to provide privacy, whilst allowing soft light to filter through. Regardless of the opacity type, these innovative blinds will ensure the room temperature remains comfortable all year round! 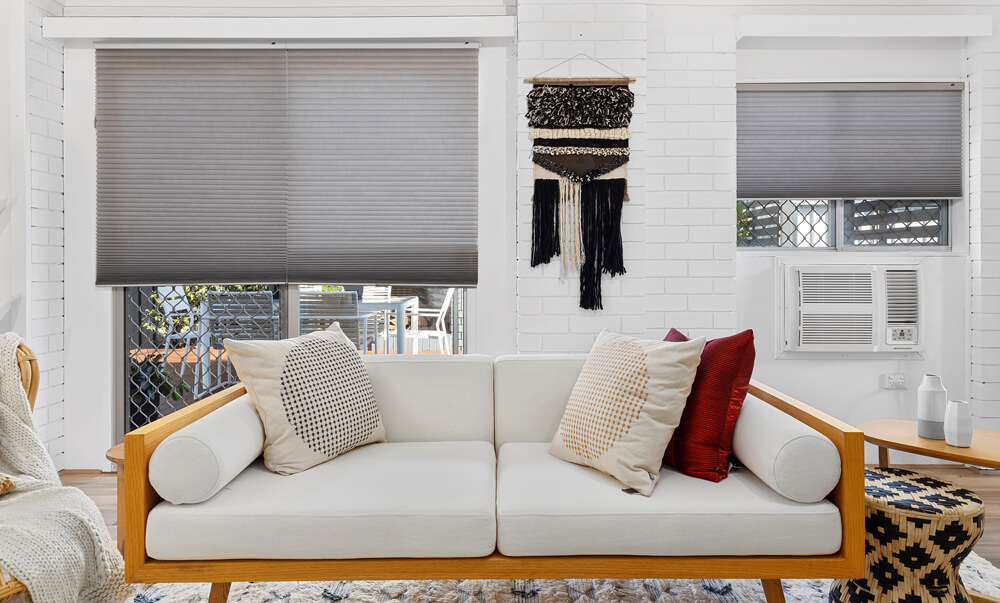 Furniture refresh - Shaynna took advantage of the homes high ceilings and went big and bold with her artwork and decor selections, especially in the front sitting room. Sleek new furniture and accessories were used to style the home, adding a much needed modern touch. 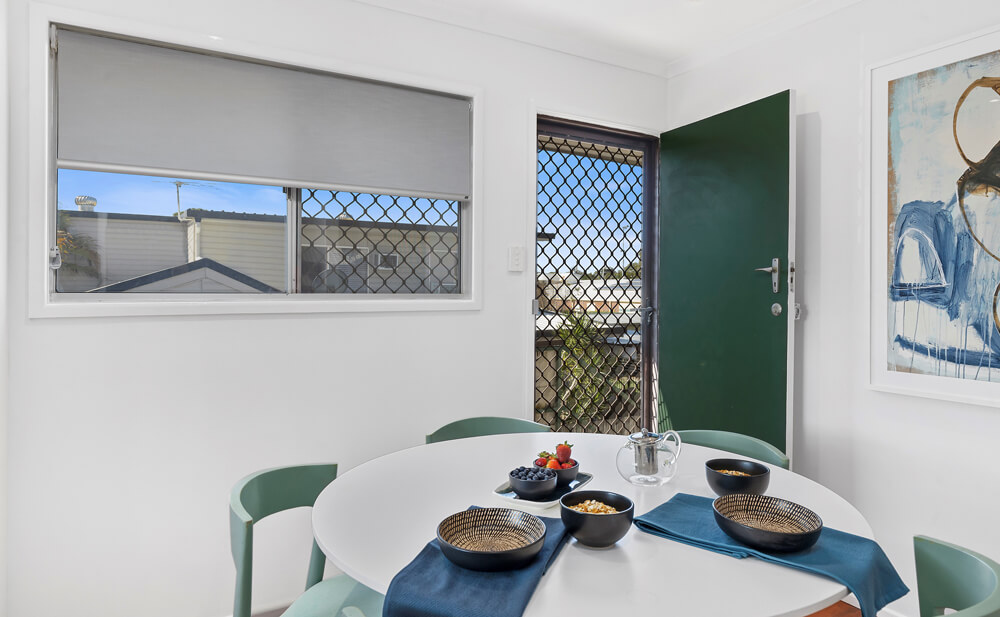 Master bedroom refresh - Although the budget didn't allow for a layout restructure, Shaynna had the carpet re-laid in the upstairs Master bedroom, and the walls painted in a crisp white hue. 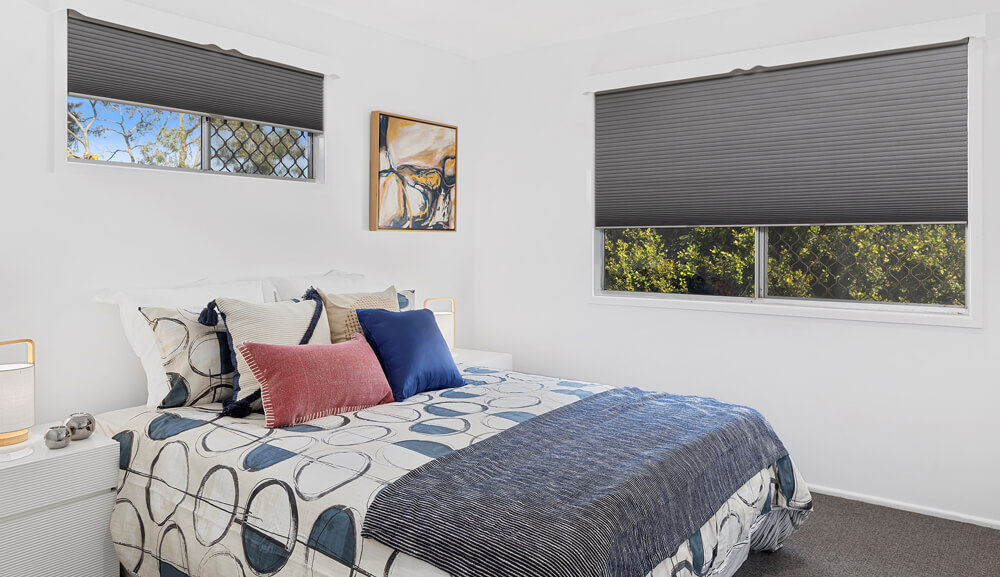 The front of the home was uninspiring and appeared to be stuck in a bit of a time warp. With a limited budget, Charlie decided to focus on two main zones including: 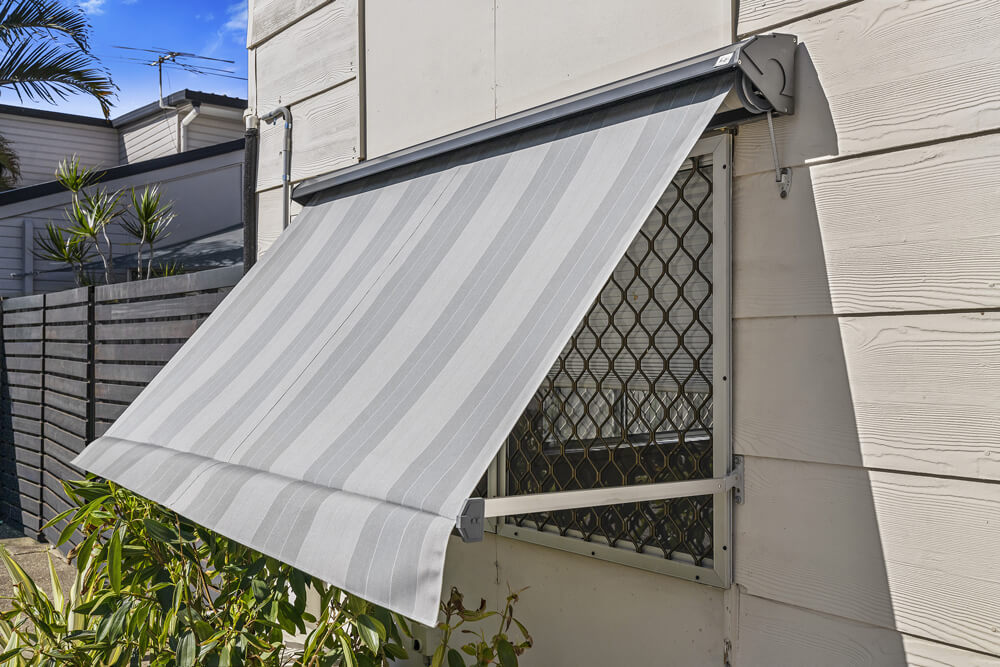 1. The front facade - Charlie started by removing the dead tree that was obstructing the view of the front door. He then added in a new pathway to connect the home with the street and revamped the veranda by tiling it in a modern stone. The old fixed metal louvre awnings on the front windows were also replaced with stylish new Luxaflex System 2000 Awnings. Charlie opted for internal winch operation of these awnings so that they could be easily operated from the inside. The Pivot arm style of these awnings also allowed for a lot more light to filter through the windows, as they could be easily opened or closed throughout the day. The light grey striped fabric selected, also worked well with the new grey colour scheme of the house.

2. Rear entertaining area - In order to create a nice flow from the newly renovated living room to the outdoors, Charlie installed new modular decking over the old red concrete. New composite timber screening was also installed to help define the new deck area, whilst hiding the shed. This new screen was also a great backdrop for the greenery and tropical plants he incorporated to soften the space.

After not so much as an enquiry before, the newly renovated house had a staggering 35 inspections. After multiple offers Narelle was able to sell for $372,103.

Like what you saw in this home renovation in Deception Bay?

Get the look with this shopping list of suppliers trusted by Selling Houses Australia!

The products in this episode were proudly supplied and installed by Luxaflex Window Fashions Gallery Dealer, ZEN Curtains and Blinds.

Burnside has now joined forces with its sister company,